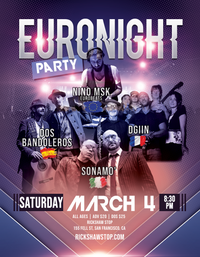 ///----------------------ARTIST LINEUP----------------------/// Sonamó (Italy) if Sting and Jamiroquai had a lovechild they would name it Sonamó. With a dynamic, passionate blend of italian melodic lines shot through with hefty doses of R&B, funk, and acid jazz, Sonamó music is both danceable yet introspective, at once familiar yet exotic, intense yet energetic, romantic and yet somehow carefree. One of the strongest characteristics of Sonamó is their high energy that’s well expressed in their memorable live performances. Dos Bandoleros (Spain) Dos Bandoleros is a flamenco rumba duo formed by two people from Madrid: Raúl Vargas and Muchacho Mandanga. Raúl Vargas is the biggest bandit, he sings and is in charge of percussion, he's a great guy, he writes songs almost without breaking a sweat. Only his concerns are comparable to his ideals and only his creativity is comparable to his talent, which on the other hand is not bigger than his soul. He will never have enough space in this world because he has a heart that does not fit in his chest. El Muchacho Mandanga is the minor bandit, he plays guitar and sings, although he is not great, he often verges on genius, always unintentionally, of course, and even aware of the effect that music has on people, he continues to write songs oblivious to the impact or the repercussion that this may cause in society. Together they waste talent, they save efforts, they are pure mathematics. They form a perfect duo, indivisible, without cracks or ties. They are capable of conquering the world with the simple melodies that they feel and arrive late but always on time to the hearts of the people. Dgiin (France) Twice voted “North Bay’s Best Band, Dgiin was let out of the bottle back in 2001 by Mimi and Gabe - musical sibs from France. Out came music, and everybody started dancing. TOUT DE SUITE! They called all their musical friends and before you could count un, deux, trois, Dgiin was a band playing to dancing crowds all around the Bay. Gabe and Mimi infuse tight harmonies into a variety of American and international styles - from New Orleans swing to French chanson, salsa and cumbia to Roma hot jazz. Now a sextet. with saxophone and violin, Dgiin is a “working band” some years playing over 100 gigs. These guys are all pros - accomplished reliable performers who know how to entertain. DJ Nino MSK (bff.fm) Italian-born, SF-based Nino Msk has been performing in the States for over a decade, from cafes to clubs to Burning Man. He's a master at reading the crowd, always providing the perfect soundtrack for any given ambiance. Nino heads up an indie music label called Eclectic Electric Recordings. His radio show Espresso Sesh, now in its 8th season, airs every Tuesday at 2pm on BFF.fm