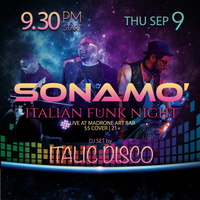 ~Artist Lineup SONAMÓ - Italian Funk Sonamó is a San Francisco Bay Area band that delivers a dynamic, passionate blend of melodies via hefty doses of funk and acid jazz. To describe the sound of the band: if Sting and Jamiroquai had a lovechild they would name it Sonamó, and it would be eclectic and open-minded- just like the group’s home base…the City by the Bay. www.sonamomusic.com www.facebook.com/sonamo.music www.instagram.com/sonamo.music ITALIC DISCO Rhythmic elegance, oblique vibes. Sensory bliss, motion to dance. Italic Disco has put out a pair of singles in the past two months that has garnered interest among European playlist curators and blogs. Nino Msk, the Italian-born, SF-based producer behind Italic Disco is known for his work in the city with community and non-profit radio. He has created 200+ episodes of his weekly podcast, Espresso Sesh on BFF.fm (SFWeekly Best Radio Station 2013-19). Italic Disco was conceived as an outlet for Nino’s uptempo, electronic-driven, disco-inspired productions, in which he mostly uses analog drum machines, synthesizers, and samplers. Italic Disco has performed at Burning Man events in Black Rock City and SF, including Pre-compression and Decompression. ID Spotify: http://bit.ly/italicdisco Oblique video clip: http://bit.ly/Oblique-clip