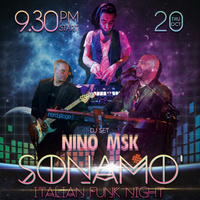 09.30PM Door 10.00PM Sonamó Live 11.30PM Nino MSK DJ SET We are so excited to high you at our show at Madrone Art Bar, one of our favorite venue in San Francisco. If you’ve been looking for something to excite you, then we have the perfect thing… join us and be amped up too! ~Artist Lineup SONAMÓ - Italian Funk Sonamó is a San Francisco Bay Area band that delivers a dynamic, passionate blend of melodies via hefty doses of funk and acid jazz. To describe the sound of the band: if Sting and Jamiroquai had a lovechild they would name it Sonamó, and it would be eclectic and open-minded- just like the group’s home base…the City by the Bay. www.sonamomusic.com www.facebook.com/sonamo.music www.instagram.com/sonamo.music Nino MSK Rhythmic elegance, oblique vibes. Sensory bliss, motion to dance. Nino MSK has put out a pair of singles in the past two months that has garnered interest among European playlist curators and blogs. Nino Msk, the Italian-born, SF-based producer behind Italic Disco is known for his work in the city with community and non-profit radio. He has created 200+ episodes of his weekly podcast, Espresso Sesh on BFF.fm (SFWeekly Best Radio Station 2013-19). Italic Disco was conceived as an outlet for Nino’s uptempo, electronic-driven, disco-inspired productions, in which he mostly uses analog drum machines, synthesizers, and samplers. Italic Disco has performed at Burning Man events in Black Rock City and SF, including Pre-compression and Decompression. ID Spotify: http://bit.ly/italicdisco Oblique video clip: http://bit.ly/Oblique-clip